As feminist scholars, studying material rhetorics of children’s play helps us to identify the forces that shape and constrain the formation of monoglossic gender identities as well as the fissures that make alternative identities possible. While I have focused here on technical and scientific toys, over the next twenty-five years we might continue to explore play and, more broadly, childhood, as a site of gender analysis.

Scientific play has historically been gender monoglossic in the sense that it has targeted boys, to the detriment of girls. However, feminized play has also been gender monglossic to the detriment of boys. We might ask what rhetorical skills are developed through traditionally feminized play with dolls and dress-up, such as constructing narratives, practicing empathy, and exercising imagination. We might also investigate gender heteroglossic play among boys and girls. In her study of children’s play with Disney princess characters, Karen Wohlwend found that boys occasionally participated, sometimes taking on both female and male roles and repurposing various dolls for different roles. Wholwend found that some children were even willing to let a male doll stand in for a female character, or vice versa, despite the strong tendency for dolls to be marketed using hyperfeminine or hypremasculine, fixed identities. While girls are strongly encouraged to engage in gender monoglossic play, girls do tend to have somewhat more leeway in a hegemonic gender system for playing with boys’ toys (as pictured below), so we might ask how girls negotiate the role of “tom boy” and how that role enables different rhetorical actions. 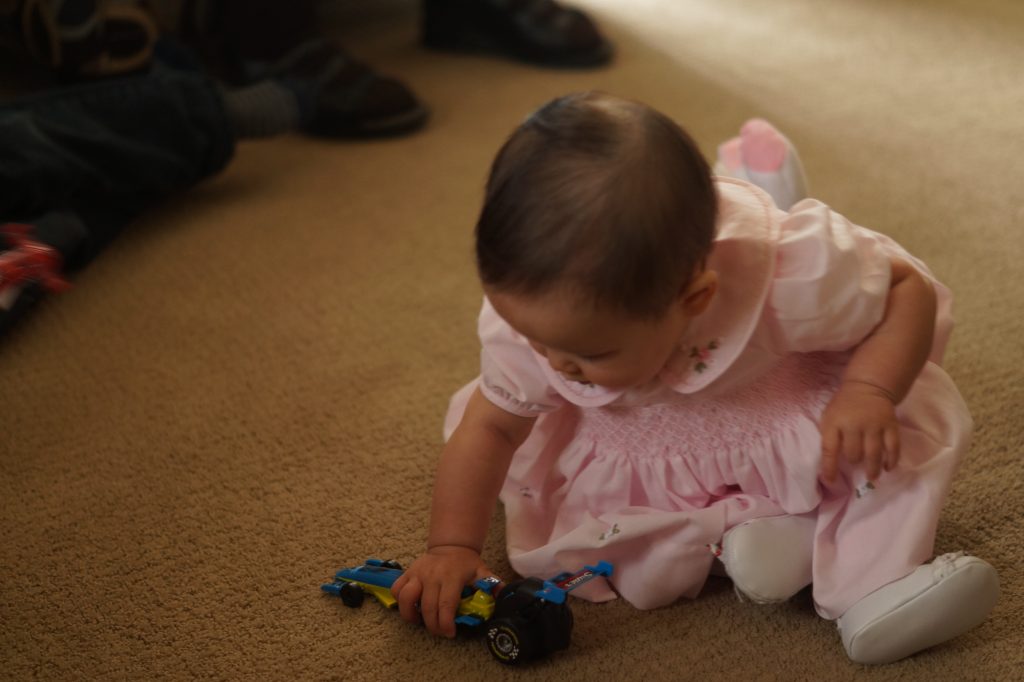 In addition to the material rhetorics of play, we might study the material rhetorics of dress that accompany children’s alternative gender performances. I’ve suggested here that, at least in advertisements, toy manufacturers envisioned their users clothed in particular ways–in suits and ties in earlier depictions, and later in “play clothes” (t-shirts and jeans). Similarly, the Disney princess phenomenon assumes a particular dress code; users are modeled as themselves dressing as princesses or in princess-themed clothing. The rise of cosplay (short for costume play) among adults provides players a space in which gender roles may be playfully enforced and contested while offering researchers a site site for analyzing gender performances.

Following this line of research, more broadly, may help feminist rhetoricians to focus on femininities and masculinities as multiple, shifting, relational, and situational, as well as material, rather than as static constructs that exist at any one time. Such a view requires us to understand gender rhetorically, as one element enacted or constituted within rhetorical situations, rather than as a static precursor to those situations (Jack, “Gender Copia”). Doing so might also require feminist researchers to continue to expand our research methodologies to incorporate qualitative research, different kinds of archives (that include material objects as well as web-based videos, as I have done here),

Finally, I hope this webtext demonstrates that childhood offers a rich site for rhetorical study of gender and for rhetorical study more broadly. Childhood should be of interest to rhetoricians because it is during this period that one develops the capacity for symbolic action. As Kenneth Burke explains, one acquires a Self and becomes a “‘person’ by learning the language of its tribe” (“(Non-symbolic) Motion” 814). In the process, we might add, one also acquires a gender identity as well as the other trappings of personhood and rhetoricity (race, class, authority) that feminist rhetoricians are committed to both analyzing and disrupting. We might quibble with Burke’s implication that pre-linguistic children are not engaged in symbolic action, but his point remains relevant: childhood represents the space and time in which symbolicity materializes, through material objects as well as words, and through play as well as explicit instruction.