Playing with toys is a rhetoric. Play interpellates children into gendered identities and often a gendered habitus, but play can also engage children in gender heteroglossic experimentation, as I will show below.

To further understand play as symbolic action, I want to suggest four material-semiotic tropes that characterize children’s play with scientific and construction toys. Play via these tropes offers training in bodily and symbolic skills; when these types of play become linked with certain gendered positions, they also inculcate children in gendered identities.

The type of play imagined by the manufacturers of scientific and construction toys has often been mimetic. As their instructions indicate, such toys have been generally designed with the idea that children would use them to imitate scientific practices. Chemistry sets work in this way, as do Erector sets and LEGO sets, which are sold with detailed diagrams and instructions. In the mimetic process, though, children often reproduce gendered roles and identities. For instance, a boy creating a derrick with an Erector set would be replicating the gender role modeled in the product’s marketing (a gender monoglossic performance); a girl performing the same activity would be challenging the expectations in the toy’s design and marketing for boys (a gender heteroglossic act). 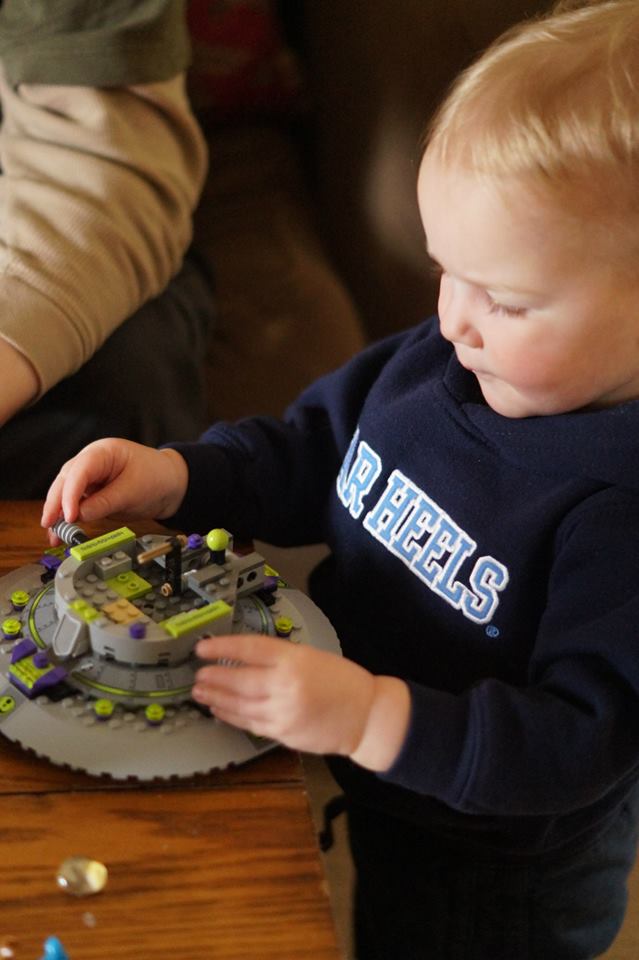 In the image above, Caroline is playing with an “Alien Abduction” LEGO set that has been assembled according to the instructions. Assembling a toy in this way involves carefully following directions, often from a diagram rather than a textual list of steps. By playing in this way, children develop spatial reasoning skills as well as the ability to follow a sequence of steps. While we might be tempted to deem mimetic play as less creative than other types, from a rhetorical perspective we might recognize mimesis as an important part of invention. Copying an existing structure is a way of understanding how things work, and it may develop facility with putting parts together that can later be applied toward new creations.

More importantly, though, this kind of mimetic play also engages gendered roles. At age one, Caroline did not assemble the kit herself; instead, she is playing with the toy her mother put together. Yet, we can see that Caroline is touching different parts of the toy. Caroline’s mother played with LEGO throughout childhood, including space-themed LEGO that is largely marketed to boys, and she continues to do so. In this way she models a gender hetetroglossic play behavior for her daughter , that is, one that challenges social expectations for that gender role. 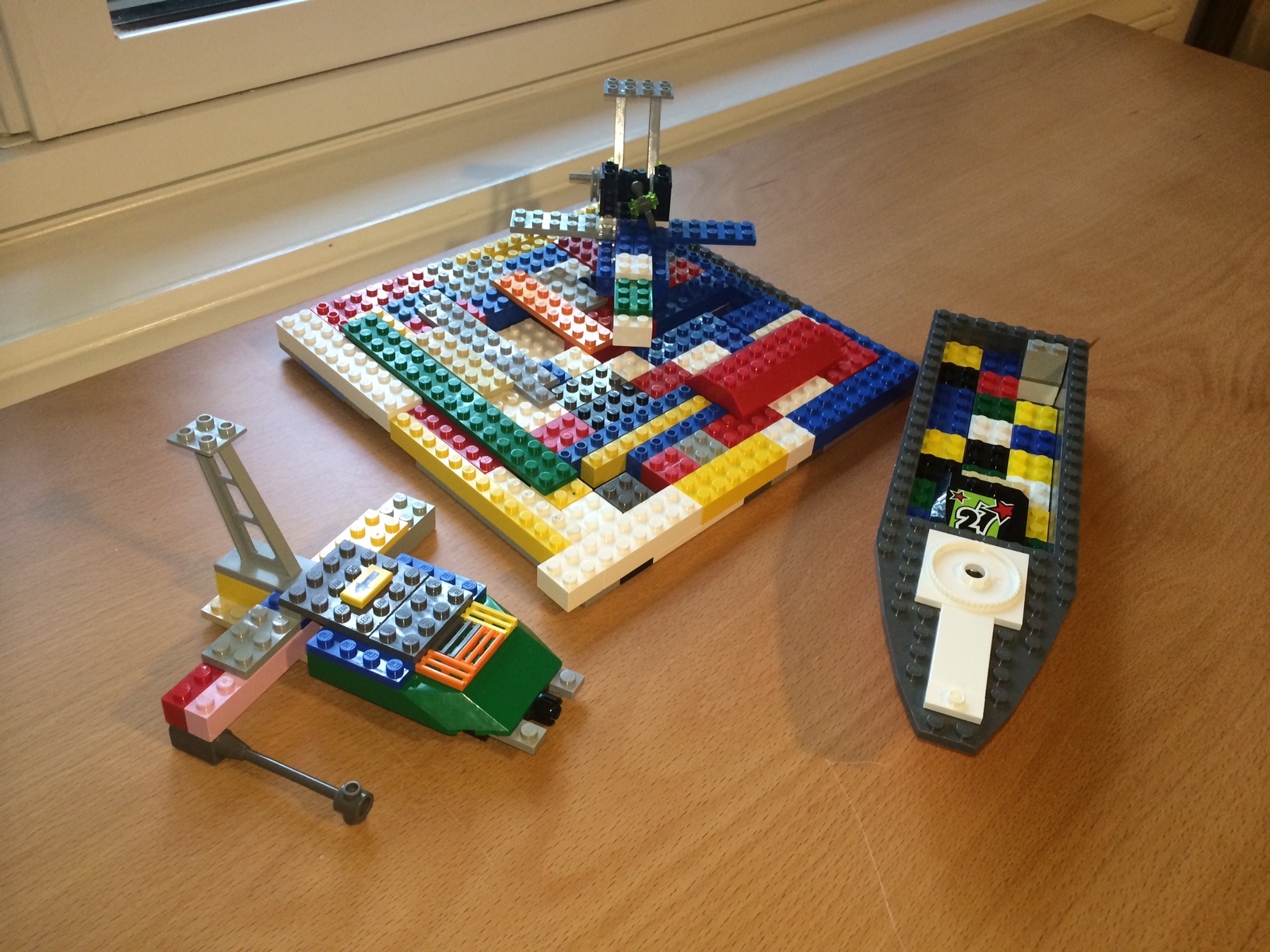 Nathan (who is 5 years old) built these LEGO vehicles, pictured above, after first building similar vehicles by following instructions. Building according to the directions allowed him to develop a schema for what each item needs. For instance, the plane needs to have some type of wings and a pointed nose, as well as a vertical stabilizer in the rear. By replicating the style of designs pictured in the instructions, and by taking a subject matter associated with masculinity, Nathan engages in gender monoglossic play.

However, play of this type is not always purely monoglossic. Take this futuristic vehicle Andrew (then aged 5) created. Like Nathan, Andrew created a vehicle that is inspired by earlier designs and basic principles of the parts required for a vehicle. Note, however, that he has chosen a female LEGO figure (or minifig) to pilot the plane. In doing so, Andrew challenges the assumption that boys can only play with figures that match their own gender; by imagining himself as the character in question, Andrew might even be engaging in gender heteroglossic imaginative play. 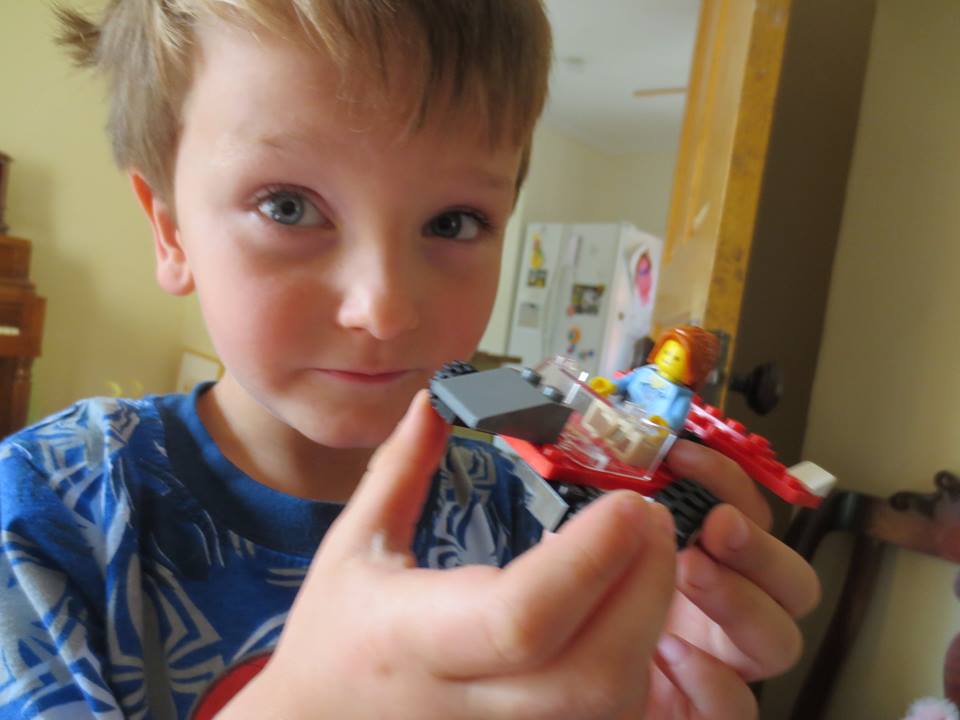 As Nathan and Andrew’s compositions demonstrate, mimetic play often shifts into inventive play; that is, they create something new by repurposing materials into new configurations. The image below displays a creation Kevin (age 7) constructed for my daughter (then one year old) when we met at a Chinese buffet restaurant. He explained to me that this was a mobile for Polly to use to go to sleep. I watched while Kevin assembled and reassembled his creation using empty chopsticks wrappers and a toothpick. He explained that the structure needed tape to hold it together, and then exclaimed, “This is like a science experiment!” Kevin cast this type of play as “scientific”— he was building something new and testing out ideas. (Later, he gave me explicit directions for how to construct a boat out of chopsticks for Polly to use in the bath.) While Kevin’s interest in a baby might be construed as gender heteroglossic (at least insofar as boys are not usually encouraged to take interest in caring for babies), Kevin cast his role as a gender monoglossic one, that of scientist or inventor. 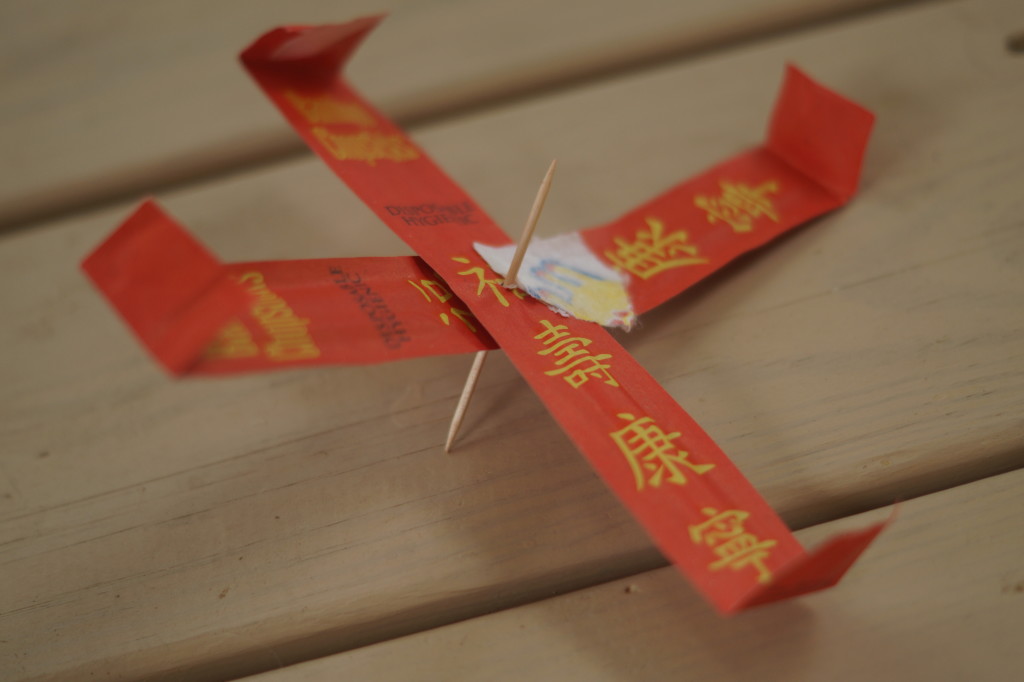 Mimesis and invention may also morph into narrative. The image below displays a scene Ivan created using LEGO figures. He described this scene as “Grandpa Bob is on his way to France.” At the time, Ivan and his family were living in France for a year as part of his parents’ sabbatical. His grandfather was set to visit the family in a month’s time. The scene represents a narrative, a story that Ivan was rehearsing. Of course, children enact narratives using many different kinds of toys, not just construction toys. Yet, construction toys uniquely invite children to put things together in different ways and create new actors (things, people, animals), scenes, and situations.

Both boys and girls engage in this kind of narrative play. However, the toys they use to do so are often marketed in ways that hide gender heteroglossia behind gendered tropes. Boys, for instance, are encouraged to act out their stories using masculine action figures (which are emphatically NOT referred to as dolls), while girls are encouraged to do so by playing with dolls or soft toys. Because LEGO toys are typically associated with boys, they offer a safe medium through which boys can engage in play that may otherwise be read as feminine. 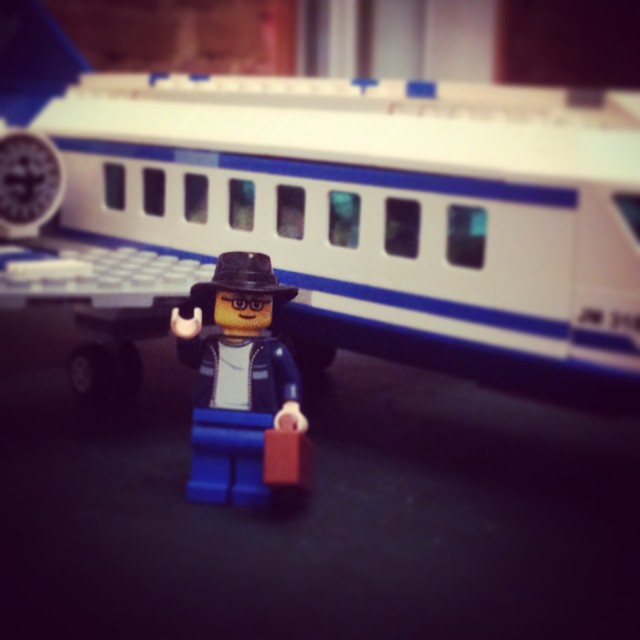 Users of Erector sets recall challenging themselves to build bigger and bigger designs, using as many parts as possible. Nobel Prize winner Steven Chu notes that he “spent many happy hours constructing devices of unknown purpose where the main design criterion was to maximize the number of moving parts and overall size. The living room rug was frequently littered with hundreds of metal ‘girders’ and tiny nuts and bolts surrounding half-finished structures” (qtd. in National Museum of American History). Another user, Austin Weber, writes that his “dream model was a ski lift that I concocted. I designed and built tall support towers and a pulley mechanism, but was never able to see my idea to fruition. I never seemed to have enough parts to pull off my creation” (Weber).  In the image below, we see Nathan’s LEGO car. Beginning with four smaller cars, Nathan has amplified his design into a giant mega-car. The rhetorical figure of amplification best characterizes this type of play. The challenge to the user is to build with as many parts as possible; to use bigger and bigger structures. On the one hand, there may be nothing particularly gendered about this type of play. However, it may also be the case that there is an inherent competitive nature to this type of play, even if one is competing against oneself—this kind of play assumes a desire to outdo oneself each time. Traditionally, competitive play has been associated with boys, while girls have been characterized as more attracted to cooperative play. 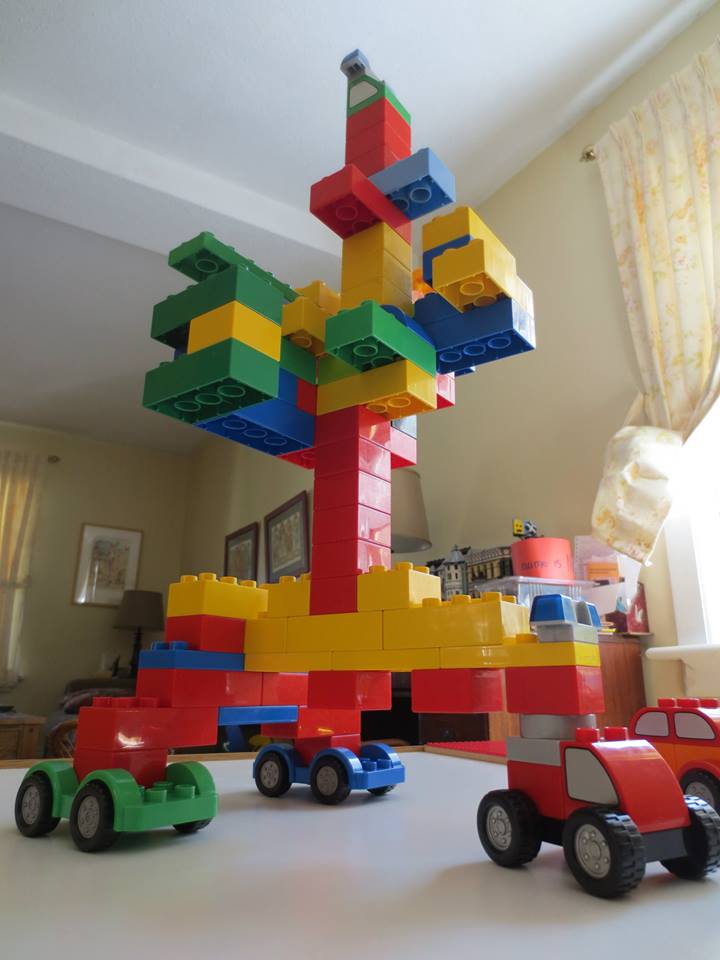 Yet, in the image below we see one stage in Madison’s ongoing attempt to build a train that can carry more and more of her My Little Ponies. 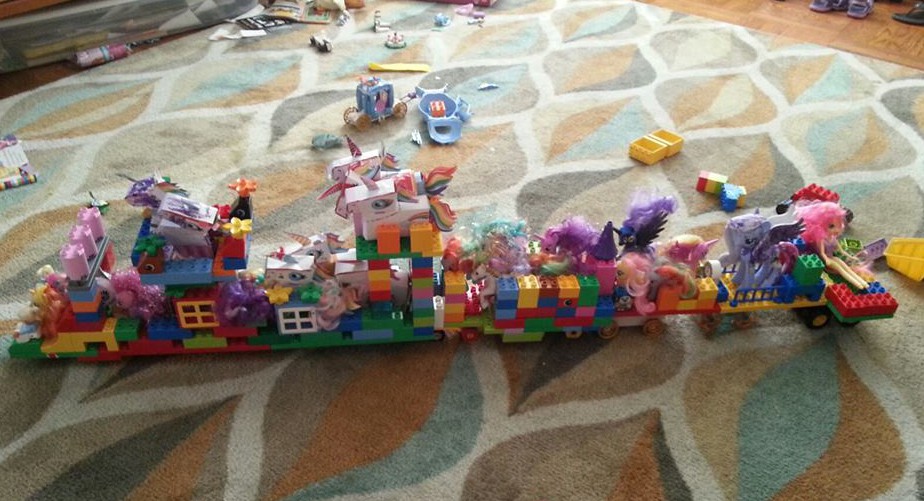 Madison’s earlier attempts began with spaces for just a few of her ponies, but Madison challenged herself to include more and more spots for the them using more and more of the pieces. Madison’s pony train offers an interesting example of a gender heteroglossic play performance; by blending lego toys with a toy marketed as feminine (the pink and purple ponies), Madison suggests an alternative to typical LEGO play, which either assumes a masculine world of pirate ships and space exploration or offers a feminized one focused on domestic and retail spaces, at least according to LEGO’s product lines. Concerned that Madison’s favorite toys were largely stereotypically feminine ones, Madison’s father came up with the idea of making pony trains in order to interest his daughter in building things with LEGO—and it worked.

In this section, I have sought out examples of girls playing with construction toys. While my sample is one of convenience (drawn from friends of mine with children), it nonetheless reflects the continued association of these toys with “boy’s play.” However, by playing with these toys in new ways, as Madison does, and by developing an early interest in playing with construction toys, as Caroline’s mother does, we can see an alternative gender performance at work, one that we might term gender heteroglossic in that it combines elements traditionally associated with girls’ play with those associated with boys’ play.