Contemporary scientific toys for girls continue in the tradition of A.C. Gilbert and his contemporaries. Toys such as GoldieBlox and Roominate are designed explicitly to model a scientific/engineering habitus, but with one exception: they seek to do so  not for boys but for girls. In this way they attempt to translate skills traditionally coded as masculine into a feminized context.

Playing with these toys provides girls with an early, informal chance to develop spatial skills, trained vision, and manual dexterity, and each set features plastic parts that can be assembled into different items. Roominate’s parts are meant to be used to build furniture or other small items for the rooms users create. The kits include images with ideas for different pieces, such as a couch, treadmill, stove, or even solar panels. The image below demonstrates some of the types of furniture that can be built using these pieces, including a table, desk, chair, and stool in this veterinarian’s office. 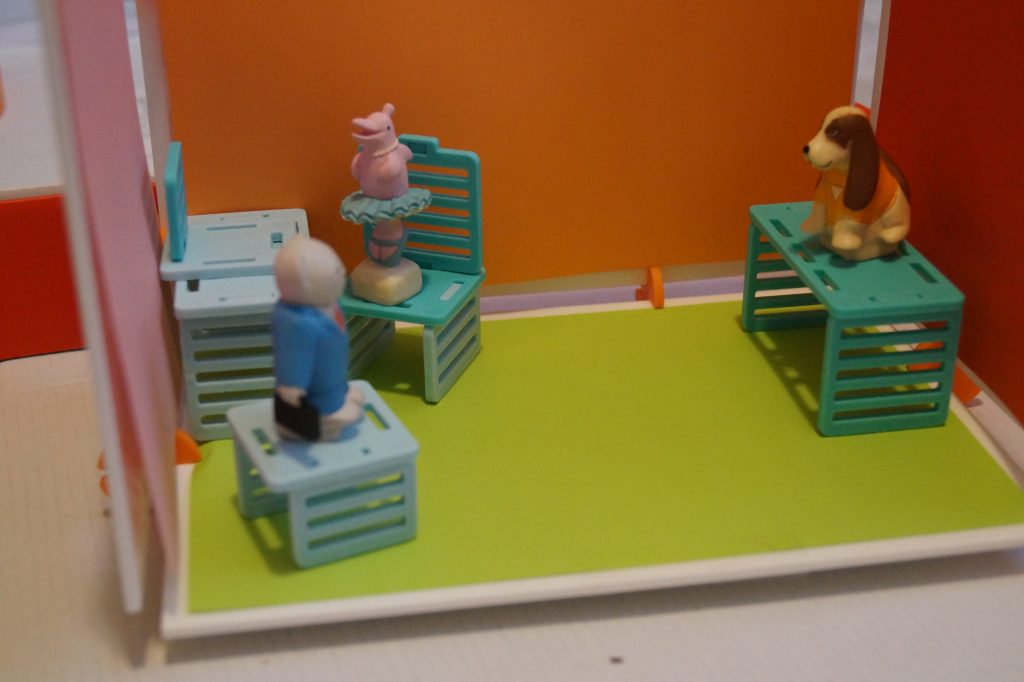 Each of these sets comes with a different type of instruction manual. The GoldieBlox manual begins with step-by-step instructions to build one device; these are embedded in a storybook format. The end of the manual includes diagrams for other items girls can build, but without instructions. To make those items, users need to develop mental rotation and spatial reasoning skills, similar to those required for the Erector set. Similarly, Roominate features step-by-step instructions for assembling a basic room and a motorized fan. Yet the Roominate manual only includes photographs of possible furniture items, such as a bunk bed, slide, or fridge. To make those furniture pieces, users must look at the pictures and determine which items are needed and how to configure them. Neither GoldieBlox nor Roominate comes anywhere close to Erector in terms of complexity, however, and the plastic parts are smooth, light, and easy to snap together, unlike the Erector’s heavy metal pieces with their tiny nuts and bolts.

Working with this toy, girls develop spatial reasoning skills that are traditionally associated with boys. By playing with the parts and trying out different constructions, girls are invited to develop an orientation to the world in which available parts become materials for creating new things. Amy Kraft’s daughter constructed this bedroom using her Roominate kit (shown below). She intuitively grasped the goal of the kit, assembling the walls and floor and then adding furniture. She drew upon tropes of feminine doll play, decorating the room with miniature posters featuring hearts and flowers, math homework, and a “cootie-catcher” (the folded blue origami detail on the desk), a toy girls often play with together. However, Kraft had to encourage her daughter to try out the motor (designed to create a fan for the room) and to identify alternative uses for it. Once she did, though, her daughter was quickly able to generate some ideas, such as a “spin art” station (not shown). This toy, then, represents gender heteroglossic play, a blend of feminized and masculinized skills. 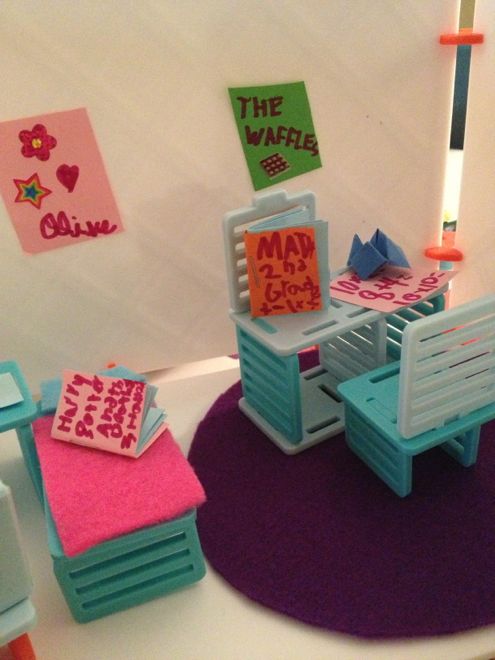 GoldieBlox encourages a somewhat overlapping bodily habitus, insofar as it includes different types of pieces that girls can assemble to form different constructions. The examples included in Goldie Blox booklets tend to be somewhat more fantastic and less realistic in nature. The image below shows some of the possibilities: a “Space-r-Launcher” and “Nacho’s Swing Wheeler.” As was the case with the Erector, there are no step-by-step instructions, so users must practice a sort of visual to bodily translation skill, determining how to assemble the parts into the items depicted. 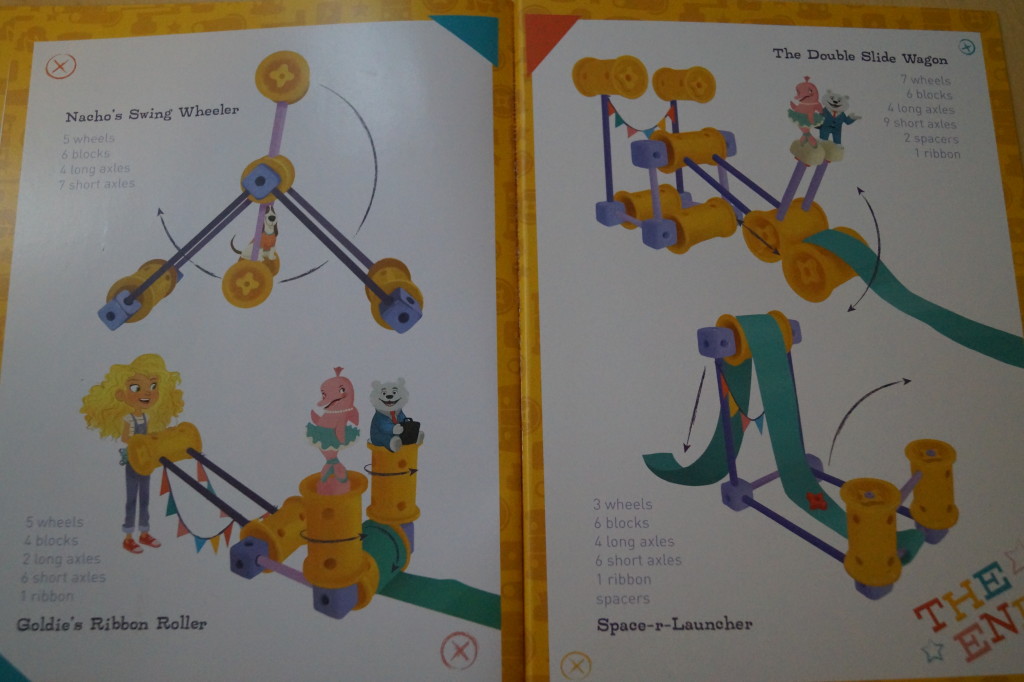 Once assembled, the items can be used for imaginative play. The figurines furnished with the GoldieBlox set (which I repurposed for my Roominate veterinarian’s office, above) provide an affordance for imaginative play not included in either Roominate or Erector: children can manipulate the figures to act out mini-narratives. When figures are provided, children can use them as characters in a narrative. When figures are not provided, as with Roominate or the Erector set, children can either repurpose other toys to act as characters, or they themselves can become the characters operating the toy. In images submitted to Roominate’s website, girls are often depicted using animal or human figures that they have taken from other toy sets to put into their Roominate creations. 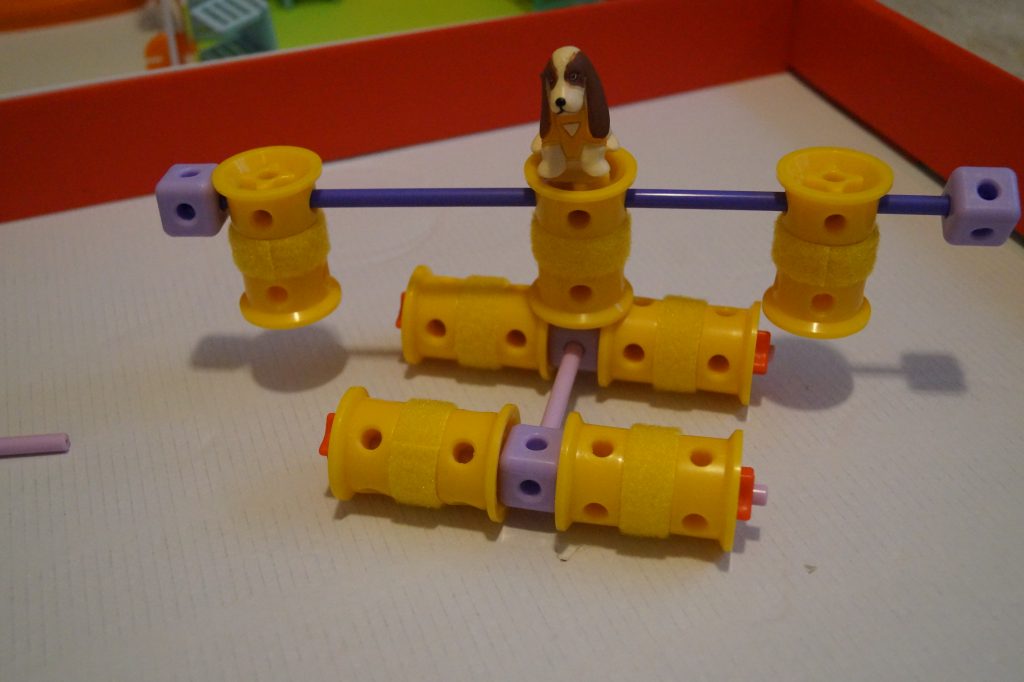 These contemporary toys, then, afford girls with play activities that are similar to that of earlier scientific sets, with an emphasis on manual dexterity and spatial reasoning skills that have traditionally been encouraged in boys and become part of a masculine habitus. Yet, they also rely upon tropes of femininity, such as narrative (in the Goldie Blox story book) and imaginative play (in the case of Roominate, with its dollhouse-like appeal). In this way, they model gender heteroglossic identities for girls.