For one, they were advertised through actual communities, readers of popular magazines meant for men and boys, such as Popular Mechanics and Popular Science. Both cultivated a scientific and technological ethos focused on self-improvement, career opportunities, and hands-on experiences that groomed men for the technological age in which they lived. In these magazines, ads for chemistry sets and microscopes appear alongside ads for training in new careers, such as electronics or radio technology, and alongside ads for hobbies men could practice. For example, the December 1934 issue of Popular Mechanics features an ad for the Erector set number 7 ½, which boys could use to make model cranes just like the “traveling magnetic crane” pictured. The ad, shown below, also features the winner of the 1934 Erector competition, Eugene White, Jr., whose model crane won him a trip anywhere in the United States. (Eugene declined the trip, preferring to use the money for his college fund, the ad notes.) 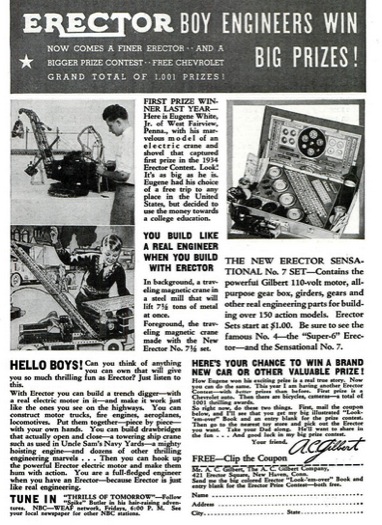 This ad appears after others for tools meant for adults: a scientific microscope, “complete movie outfit,” and a General Electric “Complete Workshop” for woodworkers. The same issue of Popular Mechanics included advertisements for handbooks in mathematics and chemistry, kits for building one’s own radio, and ads for extension courses in accounting, architecture, machining, refrigeration, and the like. Together, these materials situated science and technology as objects of masculine self-improvement. An ad for the International Correspondence School makes this explicit. Featuring a drawing of a bride and groom, the copy addresses the reader, stating: “Young man, if you are contemplating marriage, it’s much wiser to face the facts right now. . . . The thing to do is to make more money. The way to do it is to make yourself worth more money” (9a).

By advertising their toys in Popular Mechanics or Popular Science, manufacturers linked their product to masculine scientific communities by developing their own terminology and rhetorical devices modeled on real scientific discourse. The names of toy companies themselves approximated scientific and technical morphemes. One of Gilbert’s main competitors was the Porter Company, which sold Chemcraft chemistry sets and Microcraft microscope sets. Construction toys tended to be based on words like “mechanics” or “construct”: Meccano, Structo, Erector. The plosive, cacophonous phonemes evoked a tough, rugged image. The connotations of the term “Erector” need no comment, but components of the Erector set had interesting, technical-sounding names. A 1927 number 7 ½ Erector set, for instance, included a “Complete Unit Control,” the “Trumodel 3 Drum Hoist, Tip Bucket, and Clam Shell Bucket,” and a rust-proof finish called “udylite.” For all intents and purposes, none of these words means much. But they sound technological, and they helped to inculcate users of the toys into a scientific discourse.

Learning this discourse was portrayed as a step toward joining a real scientific community. While some might question whether this type of play truly prepares children for scientific careers, toy companies frequently promised that it did.  In 1914, A.C. Gilbert put out a booklet for dealers to distribute to parents, including a section called “A Hint to Parents.” In his biography, Gilbert emphasizes the novelty of this approach: “In that year there was no such thing as progressive education, and the very concept of ‘child psychology’ was one that most Americans had paid no attention to. I was emphasizing fun in education considerably before most educators thought of it” (Gilbert 135).

In the 1940s and 1950s, Gilbert continued making these appeals to parents, emphasizing the educational value of the Erector set. A 1949 advertisement includes a familiar narrative: “Not long ago I was talking to a brilliant engineer who remarked that the Christmas his parents gave him an Erector set was a turning point in his life. He is but one of countless men and women now prominent in some field of science who have told me that their interest in science was first aroused by receiving an Erector set, Gilbert Chemistry set, Microscope set, or some other Gilbert scientific outfit” A.C. Gilbert Company, 75). The inclusion of “women” in this passage is notable because, for the most part, the scientific and technical communities Gilbert referred to were dominated by men, and Gilbert largely perpetuated that tendency.

Beyond these print communities and scientific communities, though, Gilbert instituted communities in which boys could directly participate. A.C. Gilbert’s his own version of a scientific community was called the Gilbert Institute of Engineering for Boys. While it lacked an official curriculum or physical location, through the Institute, boys could earn certificates like “Engineer” or even “Master Engineer” by making Erector models and selling subscriptions to the Erector Tips newsletter (Watson 56-58). The Institute also offered awards, and boys could also compete for “Gold Fraternity Pins, Gold Watches,” or even “Thirty Dollars in Salary.” According to a 1917 advertisement in Popular Science, the first step was to send away for a free textbook, How to Become a Gilbert Master Engineer. As another step, local branches of the Institute were formed around the country, often organized by local toy stores or hardware companies that sold Erector sets. In Olean, New York, in 1916, for example, over six hundred boys turned up for a branch meeting of the Gilbert Institute, sponsored by Miller Hardware Company, the local supplier of Erector sets (Gilbert 144). For boys inclined towards chemistry rather than engineering, there were local chapters of the Chemcraft Chemist Club.

Toy manufacturers featured members of these clubs in advertisements, showing how boys could transition from junior institutes to actual scientific communities. As “Chief Chemist” and founder of the Pine Tree Chemcraft Club, young Harry K. Phillips appeared in an ad in Popular Science where he told readers about his group and their activities. Adding, “I’ll soon have a real business, too,” he models an identity as a budding chemist to other boys reading the advertisement.

Companies also offered scholarships to boys seeking scientific careers. Some were offered by toy companies, like Porter Scientific, but the connection between education, work, and play also went in the other direction. From 1930 to 1968, the Fisher Body Craftsman’s Guild, organized by General Motors, awarded a $5000 scholarship to the boy who built the best miniature Napoleonic Coach (from 1931 to 1947) or car (from 1937-1968). By 1960, the guild claimed, over eight million teenage boys had participated through local, state, or national contests and clubs. The Fisher Body Craftsman’s Guild required that all models submitted were built from scratch, including functioning mechanical parts and carefully appointed interiors. Here, the activity of building model cars (which might be considered a form of play for older boys) also functioned as a way of socializing boys into a professional community–many contest winners later became designers or managers for General Motors (Oldenziel, “Boys and Their Toys” 145).

Within these pseudo-scientific communities, boy scientists also developed genres of communication premised on the idea that play prepared one for life. For one, they ostensibly prepared one for a scientific career. Although they lacked anything close to peer-reviewed scientific journals, users could subscribe to newsletters to stay informed of the latest developments. Subscribers to Erector Tips (1913-1922) could read personal messages from A.C. Gilbert, stories about his athletic achievements, letters from boys, and pictures of prize-winning Erector models (Gilbert 131). Similarly, members of the Chemcraft Chemistry Club received the newsletter could also correspond with other members of Chemcraft clubs, sharing letters and experiments (Porter Chemical Company 113). (Notably, Chemcraft advertisements state that both boys and girls contribute to the Chemcraft Club Magazine, but advertisements typically featured boys only.) In these texts, boys could read about other boys’ accomplishments on their pathway to a scientific career.

More broadly, these texts inculcated boys in a culture of boyhood that stressed athleticism, daring, and wonder. According to an advertisement that appeared in Popular Mechanics, readers of the Gilbert Boy Engineering Book for 1922 could browse stories on topics such as “How to High Jump,” “World Famous Engineering Feats and Men Who Accomplished Them,” and “Chemistry Experiments and How To Perform Them,” before leafing through the included Gilbert Toy catalog (Gilbert Toys advertisement, Popular Mechanics 1921, 191).  This emphasis on wonder and excitement may seem unusual for a pseudo-scientific text, but as Lorraine Daston and Katherine Park have suggested, wonder was a key rhetorical appeal within an emerging scientific culture throughout the eighteenth century, after which it began to fade from proper scientific texts. Appeals to the wonders of nature persisted, though, in pedagogical texts and toys for children, so it is not remarkable to find them here. These wonders furthered the goal of engaging boys in science and interesting them in technical careers. Meccano offered “The Wonder Book,” which included the story of inventor Meccano inventor Frank Hornby, as well as “pictures of models and boys building them” (Meccano 115). Similarly, Porter Chemical offered “The Wonders of Chemistry,” which included home experiments as well as “fun, thrills, and big future opportunities for boys who know chemistry” (Porter Chemical Company 56). The rhetoric of wonder was linked to the rhetoric of opportunity.

Science toys, then, invited children to engage in gender monoglossic, psuedo-scientific communities. Toy institutes also replicated the hierarchical divisions of labor present in scientific professions, where high-ranking men designed experiments or equipment that was carried out or produced by those of lower ranks (including women) (Rossiter 166). Those who played with scientific toys were to imagine themselves as the former—as scientists or engineers. (It is notable that when Gilbert did produce a toy for girls, it was labeled as a “lab technician” set and not as a toy for scientists.)