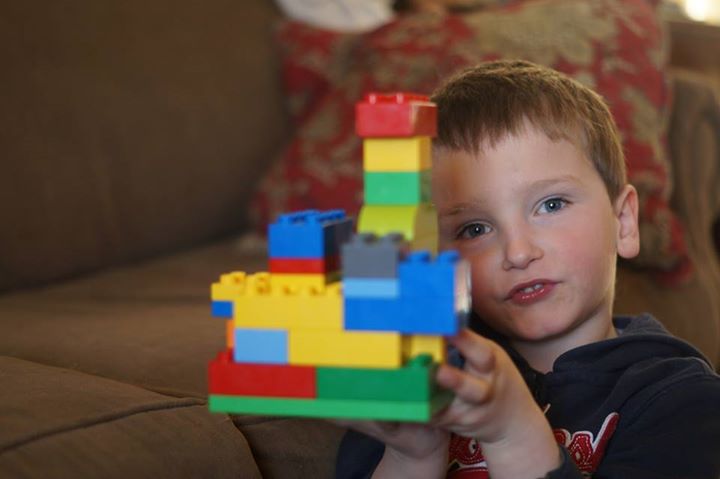 Andrew (then age 4) and his LEGO composition. Image courtesy of Megan McDermott.

Where are children in the history and theory of rhetoric?

In the last 25 years, feminist scholars have been preoccupied with the absence of women from the history and theory of rhetoric, and they have worked tirelessly to recover their rhetorical theories, productions, and actions. Doing so has challenged us methodologically and theoretically, has taken us in new interdisciplinary directions, and has shaken up concepts that have been considered central to rhetorical study but historically defined based on a male standard, from ethos (Skinner, Reynolds, Applegarth) to delivery (Mountford, Buchanan). As a result of this shake-up, feminist scholars have introduced concepts such as silence (Glenn), listening (Ratcliffe), absence, and presence (Enoch and Jack, Royster, Powell, and others) into the historiography of rhetoric. They have also focused our attention on the materiality of women’s rhetorical production, from cross-stitched samplers (Goggins) to the specific dress chosen by female rhetors (Mattingly). These examples demonstrate how feminist recovery efforts have extended rhetorical theories.

Rhetoric scholars, many of them feminist scholars, have also worked to address others who have been excluded from the rhetorical tradition and have further pushed rhetorical theory forward. For example, individuals with mental and cognitive disabilities have historically been excluded from rhetorical study, often for the same reasons used to exclude women: their perceived lack of reason or cognitive capacity. Like women, individuals with mental disabilities have regularly been deemed unreasonable; their speech and writing considered evidence of derangement rather than rhetorical activity. By contesting these views and integrating individuals with cognitive disabilities into histories of rhetoric (see Pryal, Price, Jack, Yergeau and Heilker, Prendergast, Lewiecki-Wilson), scholars are not only revising rhetoric history; their work also requires us to revisit, once again, some of our enduring notions about rhetoric. As was the case with historical recovery of women rhetoricians, focusing on rhetorics of disability has challenged concepts such as ethos (who is granted authority and deemed reasonable?), delivery (how does delivery change when the “speaker” is using sign language? how are disabled bodies read by audiences?), and material rhetoric (how do disabled speakers make meaning through multiple media and materials?). Here again, rhetorical theories have had to be rethought in order to address the rhetorical productions of a long-excluded group of rhetors.

Categorically, like women and the mentally disabled, children have also been largely excluded from rhetorical study on the basis of their supposed cognitive (and hence rhetorical) deficincies. As the next step in the search for more inclusive rhetorical histories, I call here for feminist rhetors to consider rhetoric by children, rhetoric about children, and rhetoric for children. One path forward for the next 25 years, I argue, is to consider children as part of the rhetorical tradition. Doing so will not simply add another group of speakers and writers to our histories; it will continue to push us toward richer, multimodal theories of rhetoric and gender, theories that account for dynamic systems in which gendered rhetorics materialize in bodies and technologies.

Research that addresses children’s rhetorics does exist. But it has not been gathered together under a coherent rubric. Within studies of health, disability, and medical rhetorics, scholars have examined how mothers are impelled into the role of an ideal mother or “total mother” (Jack Autism, Seigel), how the figure of the autistic child comes to stand in for autism as a whole, and how ableist language is deployed in wrongful death suits involving children with disabilities (Silva). Scholars who study social movements, such as child labor reform (Hollis, Perry, Cox), and legal rhetoric (Coltrane and Hickman) have investigated how the child, as a rhetorical figure, often functions as a stand-in for morality. And feminist scholars have examined how the classroom functions both to gender children and to “circulate the affect of students [ . . . ] to meet the demands of contemporary labor” (Swenson 139). Examples of scholarship focused on rhetoric produced by children is less common, but we might look to Jean Nienkamp’s work on Anne Frank, for instance, and Shirley Wilson Logan’s analysis of Malala Yusef’s rhetoric (forthcoming). And we have a robust tradition of studying children as pupils of various schools, as in Lucille Schulz’s study of children’s compositions in nineteenth-century schools, Elaine Richardson’s analysis of young women’s hiphop literacies, and Amelia Katanski’s research on literacies in Indian boarding schools.

Yet, this research has not yet focused on how gendered identities develop in childhood. Examining the acquisition and development of gender identity can help to address a crucial problem in feminist rhetorical study. Recently, feminist scholars have called us to shift our attention toward gender as an analytic, not just as an identity category (Royster and Kirsch 46). As K.J. Rawson explains, focusing mainly on female rhetors and their contributions to rhetorical theory tends to assume “normative notions of gender to identify and categorize what counts as feminist rhetoric” (40). In doing so, feminist scholars have not yet fully accounted for how the category of “woman” (or “man” or “gay” or “trans,” etc.) is both performed and produced. By studying childhood, we can see how gender and other hegemonic systems that constitute identities work, and we can identify potential disruptions and fissures in them. Since these systems are multivalent, to study them means to examine not only discourse and language but also material, temporal, and spatial arrangements.

Studying the rhetorics of childhood also requires us to turn our attention not only to textual artifacts but also to material, visual, and technological ones. Outlining a methodology for this type of work, Sarah Hallenbeck has called for a post-human, networked approach to this problem, arguing that gendered rhetorics emerge from articulations among people, material objects, and discourses. With Chelsea Redeker Milbourne, Hallenbeck demonstrates the usefulness of this approach in a study of the “material chronotopes” that shape how scientific objects such as microscopes are used. Different types of microscopes historically assumed different kinds of users; for instance, the pocket microscope designed to allow close study of nature on the go, allowed for broader roles for women as curious investigators of the natural world.

In this webtext, I conduct a comparative analysis of scientific toys and their marketing. I chose this subject because toys and play form a central part of children’s education. Play, as a form of material and embodied rhetoric, offers not only instruction in language, manual dexterity, and cognitive skills but also lessons in cultural values, including gendered ones. Play reflects—and also can potentially transform—childrens’ beliefs about gender, education, economics, class, technology, and more. Thus, far from being purely fanciful or insignificant, play is a gendered, embodied, material-semiotic rhetoric. Becky Francis’ concepts, gender monoglossia and gender heteroglossia, offer an especially useful theoretical tool with which to understand how these networks may both constitute identities and offer resources for performing gender. As Francis explains, a monoglossic view of gender assumes a binary sex/gender system is in place (5). Toys often function as monoglossic material discourses in this sense; in their design and marketing they assume that boys and girls have different interests, and that only one of the two groups will use the toy. The aisles of pink and blue toys in most toy stores reflect this monoglossic view. Francis points out that despite the dominance of this view, “plasticity, contradiction, and resistance” are often possible for individuals, especially when we look beyond the superficial level to how individuals actually negotiate gender in their everyday lives (4). While the marketing, production, and design of toys constitutes one part of the network, children’s actual use of those toys can repurpose and resituate those materials into gender heteroglossic articulations.

By playing, children are both constituted and embodied as social-rhetorical beings, and they act rhetorically, constructing meaningful compositions not consist not just of toys and their parts but of symbolic meanings, narrative elements, and identities (including gendered identities). Play is a crucial vector through which children develop what Pierre Bourdieu calls habitus, or “schemes of perception, appreciation and action enable them to perform acts of practical knowledge based on the identification and recognition of conditional, conventional stimuli to which they are predisposed to react” (138). Insofar as boys and girls are encouraged to play with different types of toys based on assumptions about their sexed abilities and gendered interests, they develop different kinds of knowledge, different ways of perceiving the world, and different kinds of skills. Yet, children’s material compositions offer evidence of how children at play have the potential to disrupt, reproduce, or reconfigure a gendered habitus even as they are first learning them

This webtext is divided into three main sections: toys, identities, and communities. Use the menus at the top of the page to navigate to these sections. The section on toys considers the material artifacts themselves—the design of the toys and their accompanying materials, such as instruction sets. I examine how these toys seek to inculcate a gendered habitus (visual, manual, or bodily ways of doing and being that are typically associated with a particular sex/gender). The second section on identities examines how marketing materials offer particular gendered roles for boys and girls playing with toys. The third section on communities examines how toy makers have sought to develop social networks for boys and girls to participate in as users of the toy. One way to navigate this web text, then, is to choose one of those sections to start with, read through the entire section, and then choose another.

Each of the main sections (toys, identities, and communities) is further divided into two parts, appearing as different choices from the drop-down menu when you hover your mouse over one of these categories in the navigation bar at the top of the page. In each case, the first sub-section examines early twentieth-century toys, such as microscopes, chemistry sets, and Erector sets, that offered gender monoglossic roles for boys as future scientists and engineers, and that encouraged boys to participate through psuedo-scientific institutes. In the second sub-sections, I examine how more recently developed toys, Roominate and GolideBlox offer gender heteroglossic possibilities, such as the identity position of a “Princess Engineer,” by blending scientific and technical interests with traditionally feminine ones. These toys take advantage of contemporary social media and web affordances in order to offer online communities for girl inventors. Readers who are most interested in previous time periods and the construction of scientific masculinity through toys might focus on the first sub-section in each drop-down menu. Those who are more interested in contemporary iterations of a feminized scientific habitus through play might focus first on the second sub-section in each category.