In Making Technology Masculine, Ruth Oldenziel argues that “[t]he history of the selection, labeling, and designation of objects as technology is essential for our current understanding of who is believed to be a true technologist or an inventor, who possesses the right kind of technical knowledge; and who or what may be the authentic bearer of technology” (19). Historically, the term “technology” itself been understood in ways that have excluded tools and trades associated with women from consideration in favor of those linked to male occupations. For more than a century, advertising for scientific toys has participated in this process, portraying and even helping to create powerful, powerfully gendered messages about science. Likewise, the design and packaging of toys have consistently drawn upon normative ideas about gendered identities, including links between scientific play and masculinity. In this way, toy ads, toys, and even play have participated in a cultural trend that, according to historian Ruth Oldenziel, has narrowed the terms science and technology to encompass primarily male-oriented occupations and tools.

In their advertisements, scientific toys were portrayed predominantly as gender monoglossic: that is, as suitable mainly for boys, and as preparation for careers only men could pursue (such as scientist or engineer). The front cover of this vintage A.C. Gilbert Chemistry Set manual demonstrates how this depiction worked (see below). In this case, the cover features a young man (probably a teenager) wearing a white shirt and a professional-looking smock as he works with his chemicals. His attire and his bodily habitus (the way he expertly grasps the test tubes) seems to indicate that boys were to envision themselves as future scientists engaged in serious business.

This emphasis on a gender monoglossic identity reflects the increasing professionalization of science. In the eighteenth and nineteenth centuries, both boys and girls were encouraged to engage with scientific instruments, often alongside their mothers or female teachers, as a way to learn about the natural world (Milbourne, Hallenbeck and Milbourne). This kind of exploration was seen as important for all children, especially as it was linked with appreciation for God’s creation. Girls and women were encouraged to examine specimens under microscopes, study and draw plants, or collect shells, feathers, and other curiosities. As science professionalized, however, these activities were increasingly shaped as preparation for a scientific career, and scientific careers were predominantly open to men (albeit with some exceptions). By the early twentieth century toy companies advertised their wares as preparation for future occupations for boys. For instance, Chemcraft ads featured boys who had become “boy chemists” or “amateur chemists.” Along those lines, a Gilbert chemistry set manual from 1936 invokes the kinds of identities to which boys might aspire while playing with them:

Probably most boys are interested in science because they just naturally think they will like science. This is a perfectly good and sufficient reason in itself. At the same time, a boy of intelligence who becomes interested in science would like to be reassured, no doubt, that science offers a really important field of service in the interests of human welfare . . . Every boy and girl should be impressed with this fact and be made to realize that science creates jobs, and that is application makes life more comfortable and interesting. (Johnson, Shelton, and Gilbert 1)

While according A.C. Gilbert boys must be interested in science as a potential career, it is less clear whether girls (mentioned only in the last sentence) should also consider science careers or if they should only be aware that “science creates jobs” and provides domestic comforts. Similarly, electric train advertisements from this time period by companies like Lionel Train and Ives Toys invited boys to become railroad tycoons: “You’re a railroad president, general manager, division superintendent, and engineer when you have an Ives Train” (Ives Manufacturing 111). Ads for construction toys typically hailed their readers as boys, such as a 1916 ad for Structo (an early Erector competitor) that features the headline, “What will you be when you’re a man?” (Structo 29). Erector ads frequently opened with the salutation, “Hello Boys!”, along with the encouragement to “Become an Erector Master Engineer” (A.C. Gilbert Company 85). These kinds of ads never seem to mention girls, but one appearing in the Ladies’ Home Journal did mention mothers in a sidebar, “A Word with the Mothers of American Boys.” Here readers would learn that playing with this toy will “help to prepare them for the business world, by developing Ambition as well as the constructive side of their nature” (A.C. Gilbert Company 85). Unlike children in the eighteenth and nineteenth centuries, who might engage in scientific play in order to learn more about the wonders of nature, boys in the twentieth century were clearly being groomed for scientific and technical careers, and play was advertised as a way to encourage early interest in appropriately masculine occupations.

One way the Gilbert company, in particular, modeled this identity was through the image of A.C. Gilbert himself, who positioned himself as the persona for boys to emulate. For years, ads for the Erector set featured messages from Gilbert, sometimes with a picture, while Erector Tips regularly included photographs of Gilbert, stories about his athletic triumphs, and personal messages from him. In all the message seemed clear. Through images and references to rugged, boyish activities such as camping, athletics, and hunting they communicated the idea that the idealized Gilbert boy was not nerdy or bookish but well rounded, athletic, and All-American.

Despite being marketed primarily to  boys, girls did play with these toys and were occasionally featured in company publications. Girls were featured in Erector Tips with pictures of the models they had developed. A 1915 issue featured a picture of Irene and Virginia Clare with a merry-go-round and a cradle they had built, and occasionally girls’ names were included in the list of Erector contest winners (Watson 11). However, the kinds of creations, especially the crib, featured help to maintain an impression of gender monoglossia, containing the disruptive nature of these girls’ presence in the male-dominated pages of Erector Tips.

However, many women who did become scientists can locate their early interest in science in play with scientific toys. Mary Virginia Orna, director of educational services for the Chemical Heritage Foundation, and professor at the College of New Rochelle, recounts: “My brother received a chemistry set one year for Christmas; I received a doll. At that point there was a hostile takeover of the chemistry set on my part . . . and the rest is history” (qtd. in Schmidt). Wendy Christensen, a software engineer and technical writer, received her Erector set in 1958: “My Erector set was an important par of my development . . . What was really special about those toys was the wondrous precision of the pieces. There was something about them that left an impression on me” (qtd. in Watson 119). And Evelynn Hammonds recalls that she was prompted to study science when she received her first chemistry set at the age of nine: “I wanted to know more, and I wanted to get the advanced Gilbert chemistry set so I could do more interesting experiments” (Hammonds). For some girls, such as Orna, playing with scientific toys required stealing their brothers’ toys or persuading their parents to purchase items that were considered more appropriate for boys.

Notably, it took Gilbert until 1958 to introduce a scientific toy for girls (although the company did produce toys for girls around domestic themes, such as housekeeping). Tellingly, though, Gilbert’s science toy for girls was called a “Lab Technician Set,” and it was basically a standard microscope set repackaged with feminized colors (pink and purple) and a different booklet. While girls might aspire to assist in a laboratory, they would not be invited to become “Chief Chemists.” The marketing and design of toys sought to maintain gender monoglossia using feminine tropes, such as the color pink and the term “technician,” which softened the toy’s appearance and situated it as suitably subordinate to the tools used by future chemists. Notably, the image depicts a girl using the microscope with her mother’s help, not as an independent, proto-professional type working alone in a lab-like setting, as depicted in the A.C. Gilbert Chemistry set manual, above. In this way, Gilbert’s toy anticipates contemporary attempts to interest girls in science through feminized toy designs. 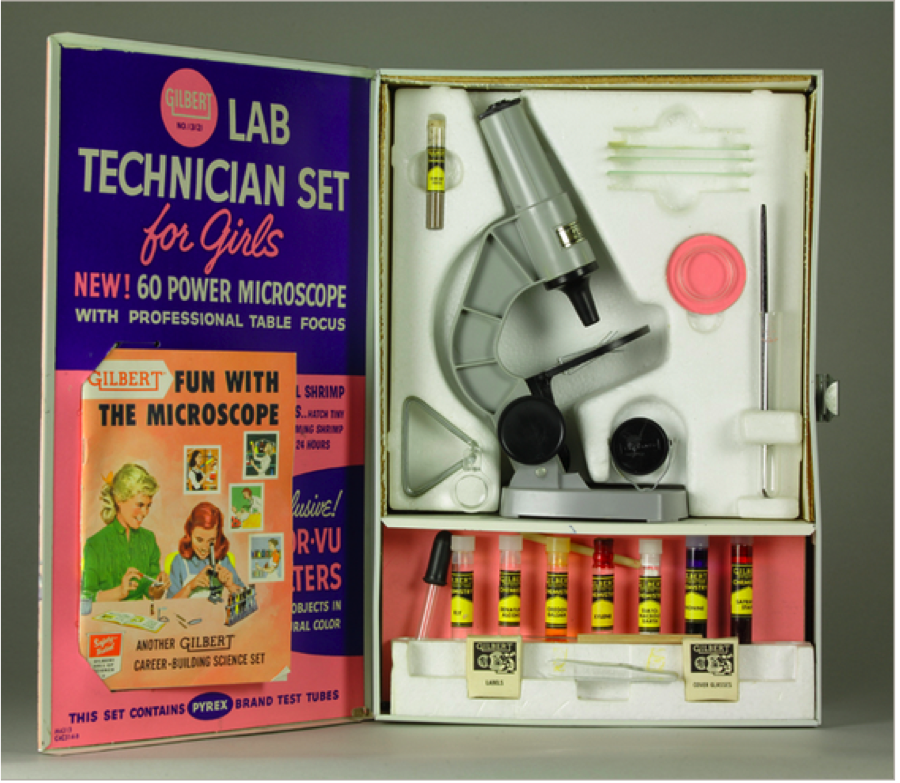 Despite the highly masculinized nature of scientific toy promotions (and the patronizing marketing of pink scientific toys for girls), then, at least some girls joined the legions of boys who played with scientific toys. In doing so, these girls took on gender heteroglossic or cross-gender performances. Evidence suggests that the articulation between certain types of toys and certain gender performances is never complete, but always partial and subject to disruption.