As I was completing this webtext, a video advertisement for a new toy, GoldieBlox, had gone viral on the Internet. In the video, three girls have set up a giant Rube Goldberg machine using traditionally female toys (pink tea sets, feather boas, roller skates, and more), along with pieces from their Goldie Blox building sets. The elaborate contraption they created represents a gender heteroglossic assemblage, one that repurposes feminized toys to create an engineering machine. GoldieBlox used this video as part of a successful Kickstarter campaign (raising over $285,000) to fund development of the toy. Today, GoldieBlox markets a range of construction play sets with the tag line, “Let’s Get Girls Building,” and the greeting, “Girls, start your engines.” It is not hard to see GoldieBlox and its founder, a Stanford engineering graduate named Debbie Sterling, as a modern day A.C. Gilbert, only targeting girls instead of boys. (While Gilbert modeled himself, his athletic prowess, and his masculinity for his consumers, Sterling models heteroglossic femininity for hers, always appearing impeccably groomed and well-dressed in feminine outfits, as though to demonstrate that an interest in science is not incompatible with femininity.)

Alongside Goldie Blox, another company, Roominate, offers electronic building sets, and their tagline, “Every Girl is an Artist, Architect, Engineer, and Visionary!” could have been written by Gilbert himself (only swapping “boy” for “girl”). Like GoldieBlox, Roominate began with a Kickstarter campaign and raised over $85,000 to launch the company. Notably, both GoldieBlox and Roominate toys are specifically designed to encourage girls to enter scientific and technical professions, and their advertising blends tropes of contemporary girlhood (especially the pastel colors and “princess” obsession) with tropes of masculine science and engineering. Like Sterling, the inventors of Roominate serve as spokespersons and role models for the product; the founders Alice Brooks and Bettina Chen are depicted on the Roominate website. Both have Master’s degrees in engineering from Stanford and, like Sterling, present themselves as attractive, well-groomed, and feminine. In this way, they create a gender heteroglossic identity for girls, one that bridges stereotypically feminine interests with masculine scientific and technical skills.

A GoldieBlox set, shown below, typically contains a set of pink, yellow, purple, and orange parts that can be put together to create movable contraptions, either by following the directions in the accompanying booklet or by putting the pieces together in new ways to build different inventions.

The designers of the toy wanted to draw on girls’ literacy skills and their love of reading, so each Goldieblox set comes with a book telling the story of a character who learns to build something to solve a problem. For example, in GoldieBlox and the Parade Float, Goldie and her friend Ruby build a parade float for Ruby when she wins the school beauty pageant, and through the process they become “Princess Engineers.” On each page of the story, the reader is shown how to build a component for the final product. In “GoldieBlox and the Parade Float,” the reader first builds a baton that is used by one of the pageant contestants, then a throne for Ruby, the winner of the pageant. Next, Ruby and Goldie model how to build a base for the throne so that it can become a parade float, and finally, how to attach a ribbon to the float so that it can be pulled by Nacho, a toy dog figure included in the set. At the end of the story, Ruby has been crowned “Miss Princess Engineer.” 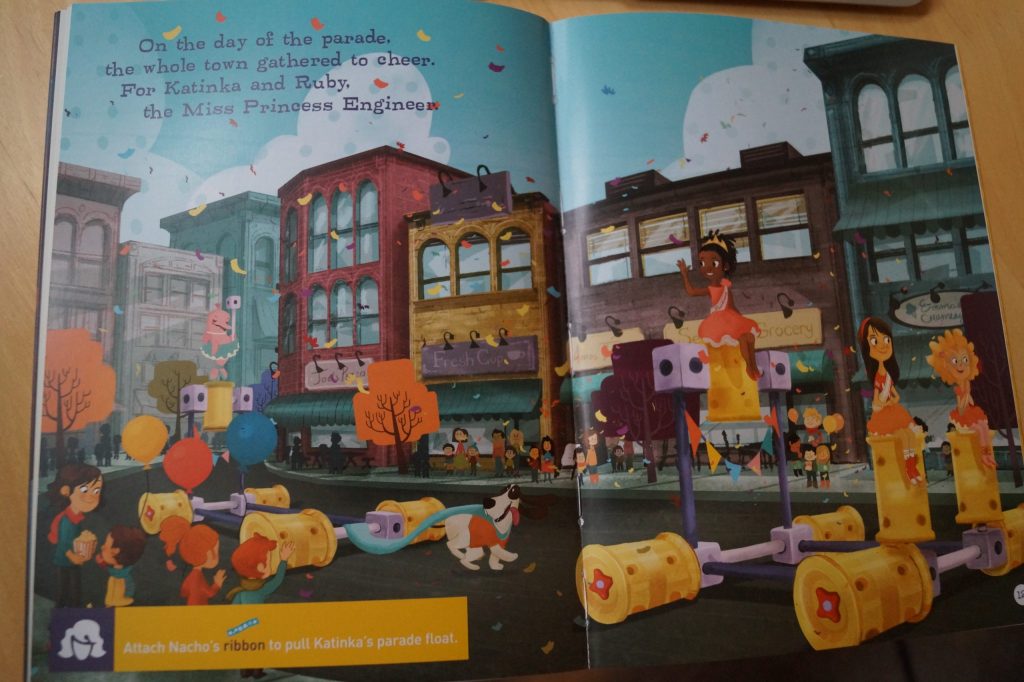 In comparison to A.C. Gilbert, who emphasized the importance of building actual models of windmills, bridges, and the like, GoldieBlox takes a more fanciful approach, encouraging imaginative (if less practical) inventions. The book also includes images of other creations users can make, such as a “whirly mobile,” a “ribbon roller,” and a “double slide wagon.” Much like the early twentieth-century Erector ads that featured boys and their inventions, the GoldieBlox website features girls with everything from a “NachoSpinner” invented by nine-year-old Keilese to a “Stack of Wheels” invented by six-year-old Sasha. As is the case with other types of building sets, including the Erector or LEGO, the more parts you have the more you can create. Girls are encouraged to purchase more sets to acquire more parts, either to build specific items or to expand one’s possibilities.

Instead of “engineer,” GoldieBlox offers its users the identity of “Princess Engineer,” a heteroglossic identity that suggests how one can be interested in typical feminine pursuits (such as pageants) while maintaining an interest in building things. Notably, while A.C. Gilbert and his counterparts only featured white children in their advertisements, the Goldie Blox character, Ruby, is African American. (Goldie, as her name suggests, is a green-eyed blonde.)