In their very design and packaging, scientific toys participate in developing a proto-scientific habitus, a bodily orientation toward doing science that portrays science as male and training for a scientific career as an activity for boys. To examine how this might be the case, I assembled an “archive” of scientific toys, including a vintage A.C. Gilbert Chemistry Set, two vintage Erector Sets, a Goldie Blox set, and a Roominate starter kit (these more recent toys are discussed under Toys). I played with the toys themselves and also examined their accompanying instructions to better understand the kinds of monoglossic or heteroglossic identities the toys sought to inculcate in their users.

The first commercial chemistry sets for children appeared in the first part of the twentieth century, when the growth of America’s chemical industry stimulated production of toy sets intended specifically to train future chemists. Porter Chemical Company began selling Chemcraft sets in 1914, while the A.C. Gilbert Company introduced its chemistry set in 1917. These toy chemistry sets were sold as close replicas of real scientific equipment. Similarly, the Erector set, invented by A.C. Gilbert in 1911, was inspired by actual steel girders. Rhetorically and materially, they were produced using appeals to verisimilitude: the kits were designed to be similar to the kinds of equipment real scientists used.

My chemistry set, which is from the 1950s, includes realistic laboratory equipment, with glass Erlenmeyer flasks, mouth pipettes, and Bunsen burners. The chemicals are stored in glass vials. These objects differ from actual scientific apparatus mainly in size: they are smaller than standard chemistry apparatus, meant for the small hands of children (shown below).

These sets promised to make users—always portrayed in advertisements as boys—feel like true chemists through the visual and haptic affordances of the objects themselves (shown in the image below). When you pick up one of these objects, it feels like the real deal–your hand senses the cool glass or metal, you see the action of the tongs, you figure out how the glass stopper fits inside the test tube. 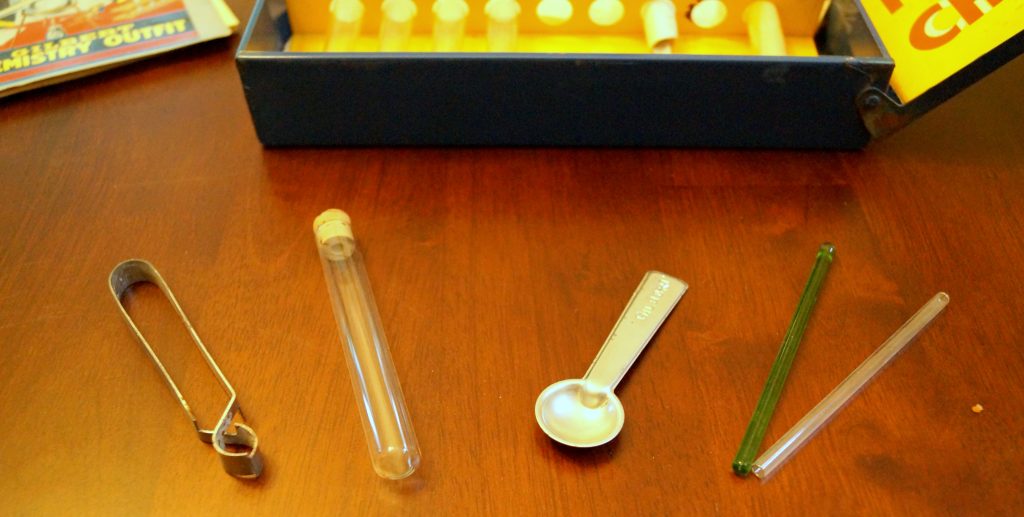 In short, playing with these scientific toys inculcates habitus. As T. Kenny Fountain describes in Rhetoric in the Flesh: “We make meaning in the world through our bodily engagement with objects, tools, and displays that seem to function as corporeal extensions and incorporations. By engaging with these objects’ affordances [ . . . ] we develop the skilled capacity to make meaning with those objects” (14). This “skilled capacity to make meaning” might be understood as habitus itself. Part of the rhetorical appeal of a Gilbert Chemistry Set or Erector set, then, lies in its ability to inculcate a sort of proto-scientific habitus. Depending on who is playing with the toy, two possibilities emerge. For boys, playing with a chemistry set like this might interpellate the player into the role of a scientist: a gender monoglossic relationship. Yet, for a girl, playing with a chemistry set might imply a gender heteroglossic situation, given the strong association between science and masculinity.

The materials that accompany the chemistry set further demonstrate how users are meant to develop this habitus. In part, the manual emphasizes proper handling of equipment, which may not necessarily seem like a gendered requirement, per se (except insofar as science itself was considered a masculine activity). The manual encourages users to learn good technique by learning “what use each piece of apparatus is intended for, and the very best way to handle or use it.” The manual explains the use of each item, such as the “spoon-shaped measure,” used to measure dry chemicals, and the “flat blade called a spatula” for transferring solid materials. The manual goes on to note: “The test tubes in your set are not the miniature toy affairs sometimes put into chemistry sets, but practical test tubes made of especially strong, heat-resisting glass.” Assuming users actually read the manual, they would learn to hold the tube away from them over the flame, maintaining “a gentle shaking motion to promote smooth and steady boiling.” Users were reminded to “[a]lways clean the test tubes immediately after you are through using them so they will be clean and dry next time” (Johnson, Shelton, and Gilbert 13-15). Experiments in the manuals included heating chemicals over a hot flame, burning paper and sulfur, and similar activities. In these ways, the book and the material practices it described appealed to the bodily habits of a scientist.

However, a certain element of risk emerges in the manual’s descriptions (and in accounts of how these toys were used) that we might link to dominant understandings of masculinity. Typically, masculinity is linked with risk-taking, which can be a way of “establishing masculine reputation” among peers (Connell and Messerschmidt 851). Dealing with open flames, potentially hazardous chemicals, and breakable glass objects are all part of a masculine scientific ethos that embraces risk. One user describes how the realistic materials and chemicals actually worked in his experience: “I remember when you could mix together such ingredients as boric acid or tannic acid or powerful alkalis that created enough chemical heat to shatter the (non-Pyrex) beakers. Mixing things that would foam over all brown and purple and melt the cheap nylon of the living room carpet earning you a swift punishment from a parental unit” (“Uncle Paul’s Toybox”). This person, who runs a Facebook page called Uncle Paul’s Toybox, also remembers getting his fingernail torn off while playing with an Erector set. These experiences, he writes, were “life lessons.” They were also lessons in a bodily habitus that included a masculine tolerance for risk of bodily harm.

We see similar masculine bodily training with the Erector set. During his commute between New Haven and New York, Gilbert was fascinated by the steel girders he saw being erected to carry power lines. Thinking boys would be fascinated as well, he developed the prototype for the Erector girder out of cardboard, and then he asked a machinist to make a steel version. Although other building sets were already in existence, including the Richter Anchor Block Line and Meccano line of construction toys, Erector had two main advantages. First, it had a motor that enabled users to make moving models of windmills, bridges, and elevators. (The earliest sets included battery-operated motors; later electric motors were introduced.)  Second, its pieces were modeled after real girders, wheels, axles, and pinions. Anchor Blocks were made of stone and steel, and they did not offer motion, while Meccano parts consisted of flat pieces of steel. They were not shaped like girders, and they did not include the gears, pinions, or motors necessary for moving models. Although Anchor Blocks and Meccano offered tough competition for the Erector, the A.C. Gilbert Company soon surmounted both, purchasing Anchor Blocks in the 1910s and Meccano in 1929.

From the beginning, the A.C. Gilbert Company promoted the Erector set based on its realistic design and motion. A 1917 ad claimed: “The square four-sided Erector girder is the thing—it’s in a class by itself—it’s absolutely necessary if you want models of battleships that look like battleships, skyscrapers, and hundreds of other models that look just like the things they represent. What’s the use of building stuff if it doesn’t look real?” Packaged in wooden or metal crates to evoke a mechanic’s toolbox, the Erector set provided boys with miniature steel elements—girders, gears, nuts, bolts, screws—that would have looked and felt similar to elements in their fathers’ workshops or a construction site, only smaller. The design itself of the toys, then, draws upon tropes of masculine occupations.

Gilbert clearly linked his new product with a masculine ethos of engineering, one that included physical pain and danger. My Erector set features these original steel elements. The first thing one notices is how heavy the set is when compared to current toys. The metal box and its contents weighs over 20 pounds. The steel elements feel cool to the touch and heavy. Putting the parts together requires one to develop manual dexterity and resistance to pain. The tiny bolts have sharp edges that dug into my fingers as I worked with them.

As I played, I pictured my father’s hands, rough and calloused from working on a farm since boyhood, how he hand-tightens bolts when working on a project, how once he cut through his wedding ring while welding something and needed stitches in his fingers. I pictured my grandfather’s hands, one fingertip missing from another farming accident; I picture him in the barn where he spent much of his childhood making rope to avoid his domineering father. Their hands reflect masculine expectations for work. A man’s hands are tough. Playing with sharp metal parts and tools like the Erector is bodily preparation for that kind of work. As a woman playing with the toy, I was situated in a gender heteroglossic activity; I felt like a woman playing with a boy’s toy. I felt out of place and physically awkward.

Boys might also have felt this way when they started out playing with an Erector set. As Carl Blum remembers in an online forum post, the Erector set “was instrumental in my mechanical development. My finger[s] learned a most important lesson about [ . . . ]  running pinch points that I will never forget” (Blum). Another user, Bill Brown, still bears the mark of a run-in with a pinch point from his Erector set, but says that it “taught him early to be careful around machinery and electricity” (qtd. in Condon). For these users, the encounter with a somewhat dangerous toy was part of the learning process, a valuable lesson in working with mechanical parts. The electric motors included in Erector sets also exposed users to the realities of electricity: the sets included few warnings, despite the risk of shock or electrocution from the electric motors. The materiality of the toys themselves, and their accompanying instructions, promised users that they would develop the masculine-encoded bodily habits required to participate in that technological culture as scientists and engineers. 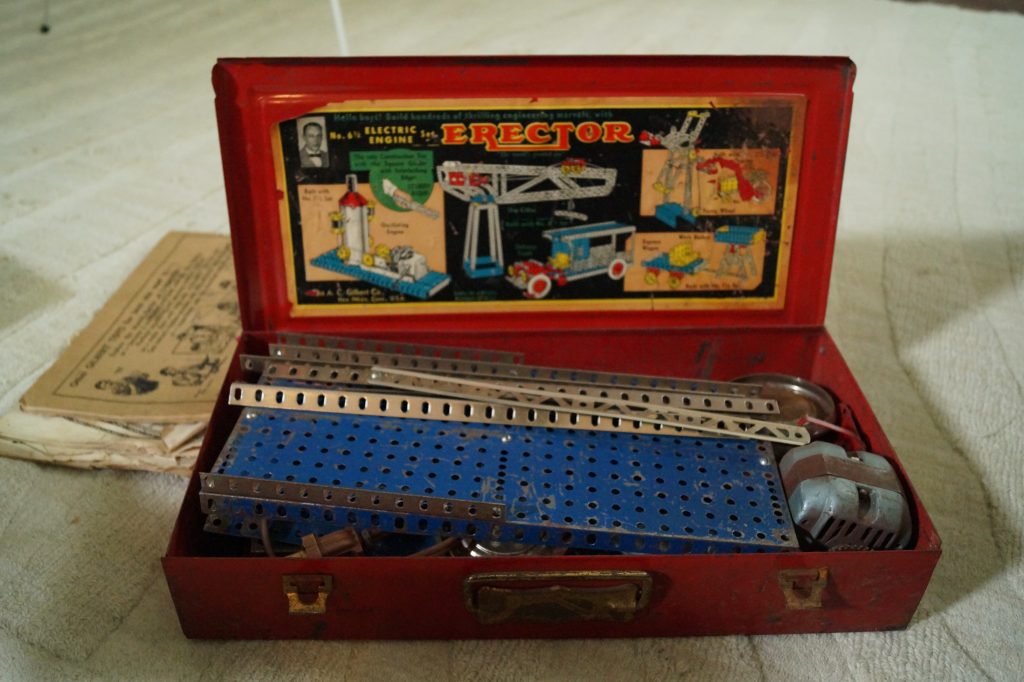